A Cold Day With A Bit Of
Saxon 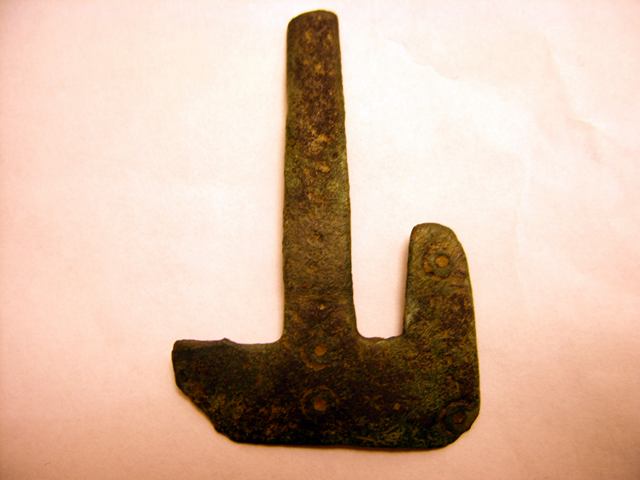 Skunky Paul has a reputation for holding some of the best rallies, all in aid of charity and mainly all in Essex. On the 3rd of February I attended my first Skunky rally and my first event for 2013. I travelled to North Essex with QM eager and excited for the day ahead. As I had read reports on some of these rallies on the forums, I was expecting some great finds would be found, and it didn't disappoint!

We arrived at the site at 08:30. Although the kick off wasn't for 10:00, we wanted to get there early to meet up with some forum friends. Over the previous couple of weeks, the BMD Forum was alive with banter for the coming event. As a little bit of fun for the day, I suggested we hold a small competition for best find of the day. This idea was met with great enthusiasm from the other members and grew into the final plan. There would be three teams, Betty Swallocks, The Essex Farie's and the A Team. The rule was that each member entered £2 into the hat and the money raised would go to the Scouts, who the rally was raising for.
The best find of the day would win the team the all important bragging rights on the forum.

With all the greetings and pleasantries exchanged, the time approached 10:00, the start was near.

Skunky Paul (His Forum name on Detectorist.co.uk) Led the 300 or so eager hunters to the available fields. He then explained which fields we could search and wished us good luck. I decided to start in a new field that hadn't seen a detectorist before, as did the rest of the 300, I waited for the dust to settle and for the excited hunters to spread out, and started my slow walk up the hill.

I started to get the odd good signal here and there which was mostly lead dross, and a couple of buttons. After an hour or so, I received a call from QM to say he had found a nice hammered Groat or half Groat.

I made my way over to his area and had a slow search but with no luck I decided to enter another field and see what could be found. Again it was mostly scrap lead and a few copper coins.

Lunch time approached and I made my way to the farmer's yard where we was all parked and also where the Scouts had set up a couple of stalls selling tea, cakes, bacon rolls and jacket potatoes.

After filling up with the delicious food on offer, I met up with the Lads in the comp to see what had been found. The best find of the day so far, by a country mile, was John's silver plated Saxon pin head. With various designs on each side. What a Beauty!!

Not many had found too much, a couple of Hammereds, and the usual buttons, lead bag seals ect.

With a renewed enthusiasm I set off for the fields to see if I could be one of the lucky ones and find something nice. It was looking like it wouldn't be my day, and as the day was coming to an end, I made my way down the hill to head back to the car to pack up. As I was in the first field, I got a really good signal, one of the best I had had. What made me smile at first was it was in a foot print, I dug down and as I flicked the clod over out fell a strange looking object. I picked it up and gave it a wipe. The first thing I saw was ring and dots!!!!!!

I saw John not far away, quickly ran over to him. As soon as he saw it he told me it was a Saxon Girdle Hanger ( A what???)

That was it. Time was up and what a last signal, a find I had made. I was buzzing. I met up with the other lads and showed them what I had found. I was so happy, because otherwise it would have been a washout for me.

John's Pin Head had easily won the comp but I couldn't have cared less.

Here's the rest of my finds for the day. 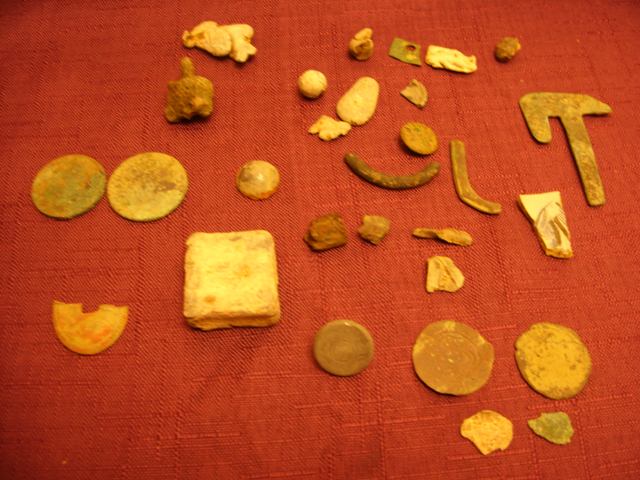 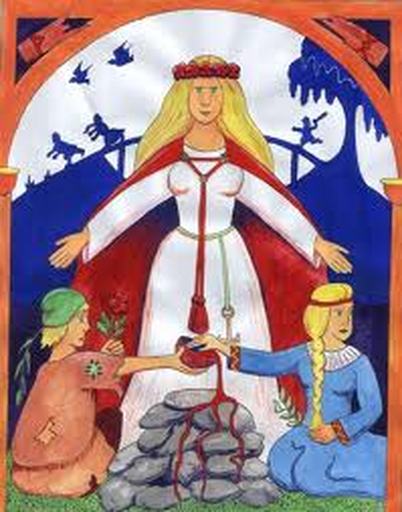 This picture of Lofn, Goddess of Love was painted by Thorskegga who can be found on Fickr. She has kindly given me permission to show it here.

You can see the Hanger in use.

Many thanks to Paul and the Scouts for organising a great day!