Back to the Lizzie Field 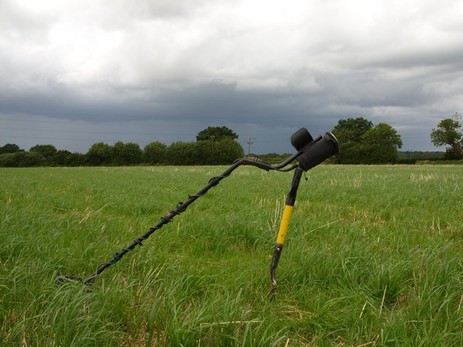 Well today I thought I would return to the same field as last week, where I was fortunate enough to find the broken Lizzie six pence (See here).

Today's search couldn't have been any more different though, as my last visit to this site, I was getting loads of signals, whereas on this occasion, I found it quite hard to get a decent one! Same machine and same settings. Just a different day. It goes to show you how certain conditions can play a part out in the field.

I began detecting at about 10am and instead of going straight to the spot where I found last weeks hammered. I decided to give the field a rough going over, and I planned on using the Union Jack pattern.
On my first length up the edge of the field I only managed one decent signal and it turned out be this lovely Livery Button with a flowers design. I really like picking up buttons like this as they can be very unusual. 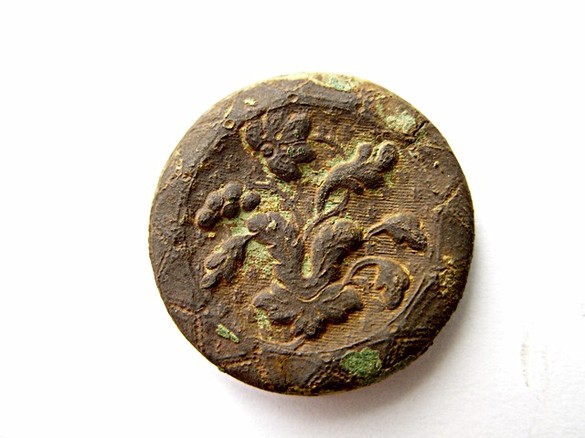 Livery Button with a Flower design

It took me about another 45 minutes until I was starting to get my ear in, so to speak. I was beginning to pick up more signals many of them small buttons and bits of lead dross.

Unfortunately about 80% of this field is littered with the dreaded coke. The machine I use is a XP Goldmaxx power which is known to give a good signal for it. The GMP does have an Auto mode, in which the detector discrims  against coke. The only down side to this is that I believe the machine becomes less sensitive to small targets such as cut half's and other smaller hammereds. So I prefer to persevere with the coke and after time I begin to learn the difference between the tones. I still dig them just to be sure as I have only had the machine for 4 months and I'm still learning it.


Another one of the lessons I'm learning as well  is the iron tones. When I now get one of those 'iffy' tones I am now 90% sure if a target is iron or not. One of my targets today turned out to be a very interesting iron find. I got a good signal on this and I'm sure that most machines would of gave one too. Its a 14th-18th century cannon ball, or grape shot. I have been told on the Detectorist forum that it is from  a serpentine cannon. It weighs in at 219g and is 40 mm in diameter. 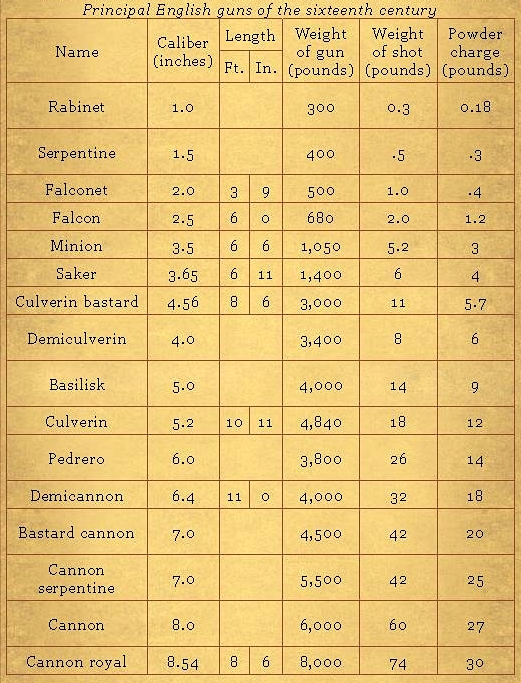 Here is a table for a guide to the different Cannon shot used in England
The cannon ball is a nice and different piece from the normal musket balls that I tend to find, so finding this really made my day.

When I started detecting this morning the weather was perfect. With a nice bit of sunshine but not too hot. With my head down and concentrating, I didn't notice the huge black clouds heading for me. The wind began to pick up and I could smell the rain in the air. There is one very large tree right at the the edge of the field, on the other side to me! I decided I better make my way to the cover of the tree just in case the rain did come. As soon as I made this decision, down came the rain! And I was soaked to the bone. All of a sudden a huge crash of thunder hit and made me jump in fright, I must of jumped three feet in the air, ha ha
After having a couple of cups of coffee and a cigarette, the rain calmed down a little and I carried on with my search. 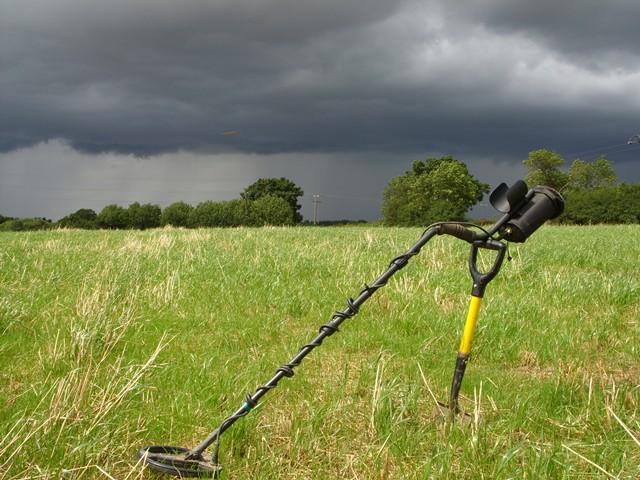 Some people don't like to find too much lead, but I am always happy to find it on a site, as it shows that there has been activity there. Lead has been used for centuries, as it is such a easy metal to use and ply, due to its low melting point. The tokens wasn't the only lead finds I made today. I also found a couple of bag/sack seals and lead weights.
Suppliers of certain goods such as fertilizer and seed would seal their bags or sacks with one of these lead seals. It would provide the customer a receipt as such, it would show who made the produce and where. 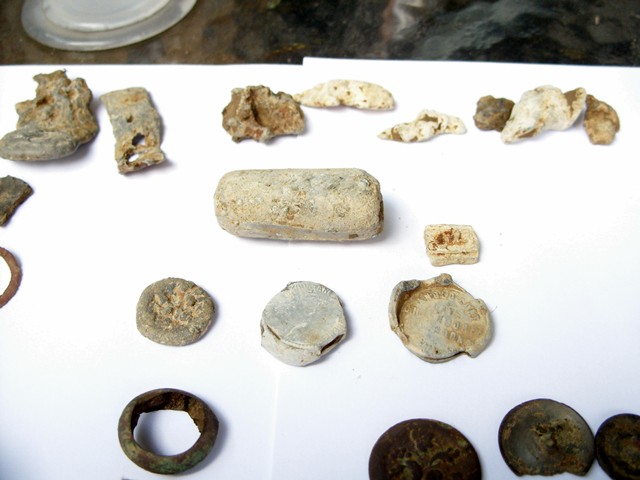 I always seem to find quite a lot of buttons on this field, and today was no different. I did find some nice examples, and one in particular made me smile. Although it is not a button as such, it is more of a stud if anything. It still has the leather attached around it, maybe because it is not that old.

It is a stud from a piece of equestrian use. It has the word 'Dickies' through a horse shoe.   I know that 'dickies' make many work and PPE Clothing, so they must have a line in the  equestrian field also. 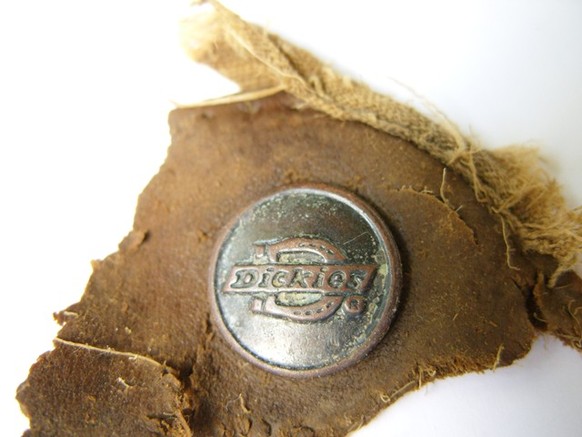 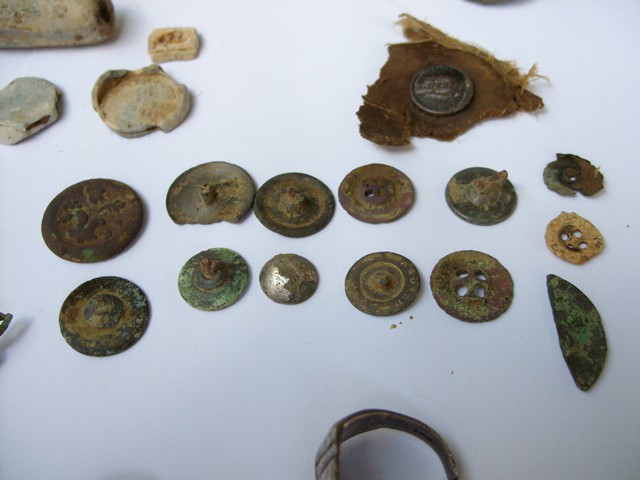 A selection of the buttons I found today
One of the great aspects of the GMP is its ability to find with ease very small targets. I will get a great signal through my headphones that I am imagining it to be an average size find. But it turns out to be tiny. Here is a selection of the tiny finds I found today. 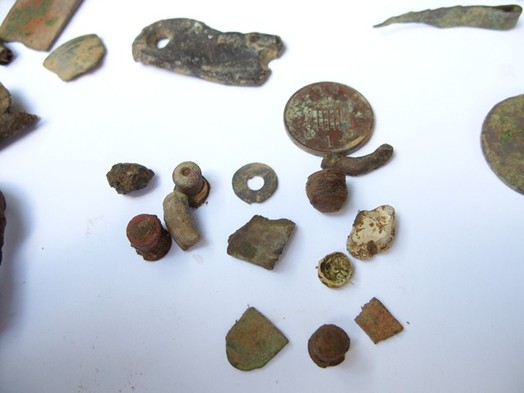 This is my last find of note, and one I am extremely happy with. Its a man's silver ring. I believe it to be a man's as it is so large. I don't think it has much age to it but it was a welcome find none the less and rounded off a great day once again. At the moment I am struggling to get a good clear picture of the hallmarks. There is RJ stamped inside the ring, and on the other side is a set of hallmarks, but they are so tiny, I am having trouble seeing them through my loupe even. I think I will take it along to a Jeweller for advise to its age and maker

So there's another dig report for you to read over, and I hope you enjoy reading it.
Once again, thank you for taking the time to read these reports,
Until next time... Happy Hunting