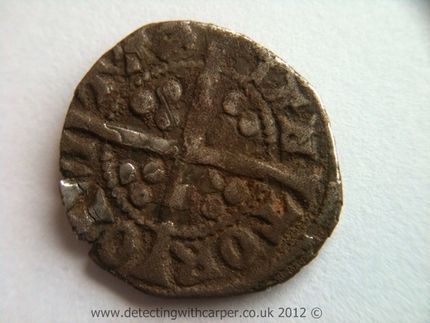 A English king best known for his campaigns to subdue Wales and Scotland, Edward was also responsible for significant legal and administrative reform in England

History of Edward I

Edward was born in June 1239 at Westminster, the son of Henry III. In 1254, he married Eleanor of Castile. Edward's early adulthood took place against a backdrop of civil strife between his father and rebel barons. Edward was himself held captive by rebel leader Simon de Montfort before escaping and leading royalist forces to victory at the Battle of Evesham in August 1265, where de Montfort was killed.

In 1270, Edward left England to join the Eighth Crusade. His father died in 1272 and Edward returned to London, arriving in August 1274. He was determined to enforce his primacy in the British Isles. The first part of his reign was dominated by his campaigns in Wales. He invaded in 1277, defeated the Welsh leader, Llywelyn ap Gruffyd and built a ring of castles to enforce his authority. When his rule provoked rebellion, he invaded again. Gruffyd was killed in battle in 1282 and his brother David executed, ending Welsh hopes of independence. Wales was brought into the English legal and administrative framework and in 1301 Edward's son was proclaimed prince of Wales - a tradition that persists to this day.

At home, Edward was responsible for a variety of legal and administrative reforms, asserting the rights of the Crown, promoting the uniform administration of justice and codifying the legal system. His military campaigns necessitated increases in taxation which in turn required more regular meetings of parliament - by the end of Edward's reign, these had become an established feature of political life. The desire for financial gain contributed to Edward's expulsion of Jews from England in 1290.

In 1292, Edward was asked to arbitrate in a succession dispute in Scotland and nominated John Balliol as king. Balliol duly swore allegiance to Edward, but Edward's demands pushed the Scots into an alliance with France. Edward invaded and conquered Scotland. Opposition gathered around William Wallace, but he was captured by the English and executed in 1305. In 1306, the Scottish nobleman Robert the Bruce rebelled. 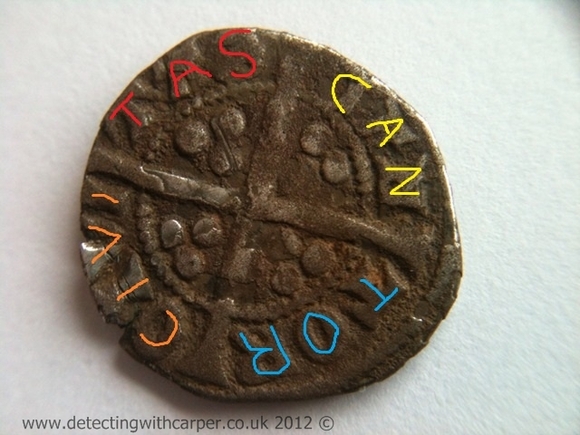 Alan "QM" Warner, has taken the time to give me a full ID on this coin. This is the information kindly provided by him
After looking at this Edward penny for some time, although the obverse is worn I believe it to be a Edward 1st class 10 coin.  The reverse reads CIVI TAS CAN TOR (Canterbury mint).  The obverse reads EDWAR ANGL DNS HYB and due to the style of the late S leads me to class 10.  But I cant narrow it down any further as the crown is a bit worn, but my gut feeling is a class 10ab 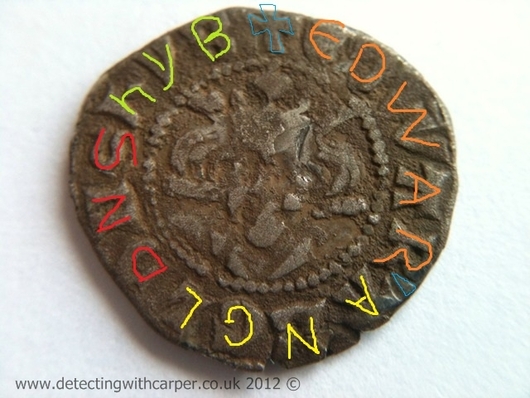