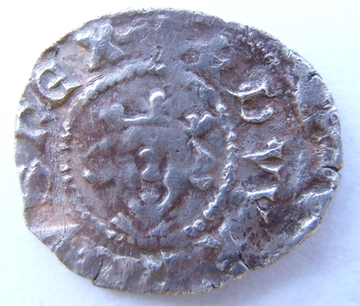 Edward was born on 25 April 1284, the fourth son of Edward I of England. He was the first English prince to hold the title prince of Wales, which was bestowed on him by his father in 1301.

Edward I died in July 1307 and, his three elder brothers having pre-deceased him, Edward became king. He immediately recalled his favourite, Piers Gaveston from exile - Edward I had banished him to France for his bad influence on his son. Gaveston was given the earldom of Cornwall, previously a title conferred on royalty.

Opposition to the king and his favourite began almost immediately, and in 1311 the nobles issued the 'Ordinances', which attempted to limit royal control of finance and appointments. Gaveston was twice exiled at the demand of the barons, only to return to England shortly afterwards. In 1312, he was captured and executed by the barons.

In 1314, Edward invaded Scotland, only to be decisively defeated by Robert the Bruce at Bannockburn. Power was now in the hands of the barons headed by Edward's cousin Thomas of Lancaster, who by 1315 had made himself the real ruler of England. Yet Lancaster did little to initiate reform and parts of the country collapsed into anarchy.

By 1318, Edward and Lancaster had been partly reconciled, but the king had two new favourites, Hugh le Despenser and his son. When Edward supported the two Despensers' ambitions in Wales, a group of barons banished both father and son, prompting Edward to fight back. He defeated Lancaster - who had appealed to the Scots for help - at Boroughbridge in March 1322, executing him and recalling the Despensers, with whom he now ruled.

Edward's wife, Isabella of France, now emerged as a focus of opposition. In 1325, she was sent on a diplomatic mission to France where she met and became the mistress of Roger Mortimer, an exiled opponent of Edward. In September 1326, they invaded England. There was virtually no resistance and the Despensers were captured and executed. Edward was deposed in favour of his and Isabella's son, who was crowned Edward III in January 1327.

Edward II was imprisoned at Berkeley Castle and murdered there. 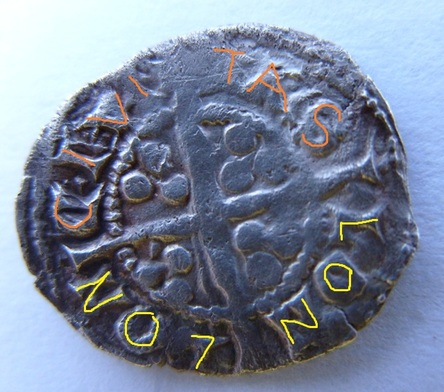 Alan "QM" Warner, has taken the time to give me a full ID on this cut half. This is the information kindly provided by him

Although I hadn't received any dimensions on the coin from Dan, I can say for sure this is a Edward farthing.  The absence of the spear heads either side of the central fleur on the crown tells us this.  Also it tells us its either a type 1 to 6 and 28 to 33 . Also if you look at the obverse it has an inner circle which was on types 1 to 8 and 28 to 33.  What now helps us to narrow it down further is the reverse legend, which reads CIVI TAS LON DON.  Coins with this reverse started in type 14.  So we now know its a coin type 28 to 33.  The obverse legend reads EDWARDVS REX .  This legend was on coins type 28 to 31.  If we look at the N in DON,  its quite narrow so this leads me to believe its either type 28 or 29 date for theses 2 types is 1300 to 1310 so I'm unsure whether its a late Edward 1st or an early Edward 2nd 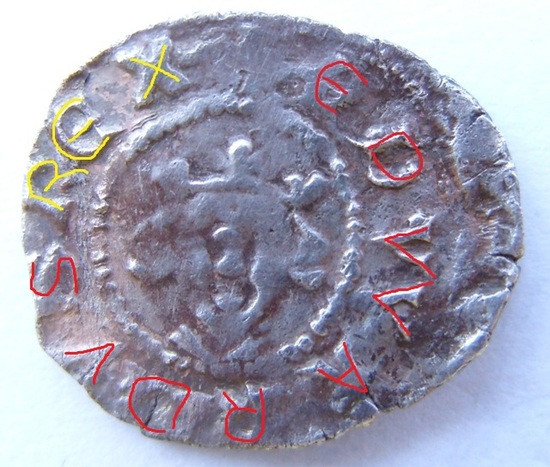 Once again I would like to thank Alan for taking the time and effort to give me such a full identification on this coin.

Alan 'QM' Warner can be found on the British metal detecting forum. He will gladly assist in any Hammered coin ID's you may need