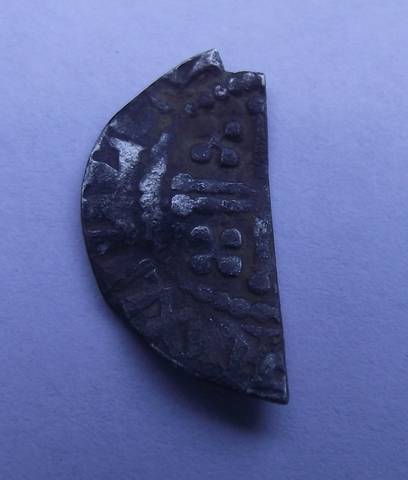 In ancient times our ancestors had only one coin, the Penny. To make smaller 'change' subjects was able to cut the coin into quarters. Each Penny had a design of a cross. This was later used as a guide line for cutting.

King of England from 1154, Henry strengthened royal administration but suffered from quarrels with Thomas Becket and his own family. Henry was born at Le Mans in north west France on 4 March 1133. His father was Count of Anjou and his mother Matilda, daughter of Henry I of England. Henry had named Matilda as his successor to the English throne but her cousin Stephen had taken over.

In 1150 - 1151, Henry became ruler of Normandy and Anjou, after the death of his father. In 1152, he married Eleanor of Aquitaine, the greatest heiress in western Europe. In 1153, he crossed to England to pursue his claim to the throne, reaching an agreement that he would succeed Stephen on his death, which occurred in 1154.

In 1164, Henry reasserted his ancestral rights over the church. Now archbishop of Canterbury, Becket refused to comply. An attempted reconciliation failed and Becket punished priests who had co-operated with Henry. On hearing this Henry reportedly exclaimed, 'Will no one rid me of this turbulent priest?' Four knights took his words literally and murdered Becket in Canterbury Cathedral in December 1170. Almost overnight Becket became a saint. Henry reconciled himself with the church, but royal control over the church changed little.

In 1169, an Anglo-Norman force landed in Ireland to support of one of the claimants to the Irish high kingship. Fearing the creation of a separate Norman power to the west, Henry travelled to Dublin to assert his overlordship of the territory they had won. And so, an English presence in Ireland was established. In the course of his reign, Henry had dominion over territories stretching from the Ireland to the Pyrenees.

Henry now had problems within his own family. His sons - Henry, Geoffrey, Richard and John - mistrusted each other and resented their father's policy of dividing land among them. There were serious family disputes in 1173, 1181 and 1184. The king's attempt to find an inheritance for John led to opposition from Richard and Philip II of France. Henry was forced to give way. News that John had also turned against him hastened Henry's death on 6 July 1189. 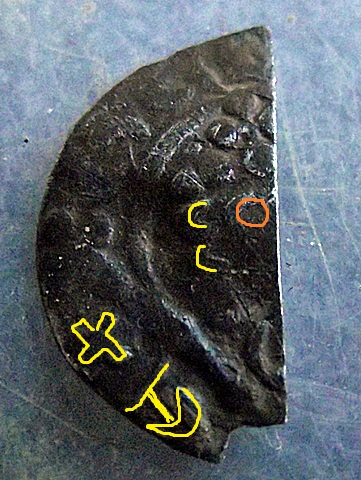 Alan "QM" Warner, has taken the time to give me a full ID on this cut half. This is the information kindly provided by him

we start with the reverse ...we can see WILLEL ...THIS CAN BE SEVERAL MONEYERS ...either WILLELM ...or WILLELM B ...WILLELM L or WILLELM T ....the last 3 minted in London on class 5a/b/c class coins which would be date around 1204/5-1208/9 [ king John ] ..now I know you will be well pleased with that as that would be your earliest hammered coin ...but I believe this is even earlier the 1st moneyer I mentioned plain old WILLELM minted classes in London 1a-1b 2-5c ...Lincoln 1b-2 .....York 1b and Northampton 1a-1b as well as other classes and mints a busy lad our WILLELM was ..now the reason iv mentioned these classes is because I believe your coin is a class 1b .... the style of the E and X and no pellets in hair curl ...and the large round eye ...all lead me to class 1b ...making the date 1180-1189 and more likely HENRY 2ND 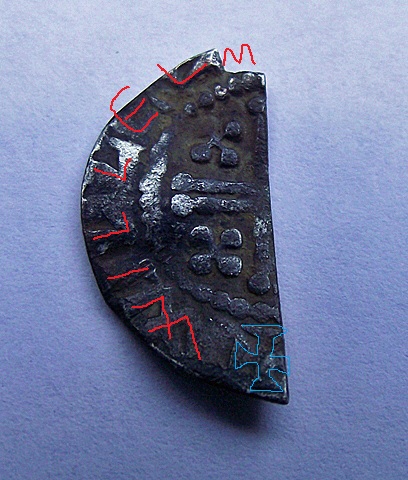 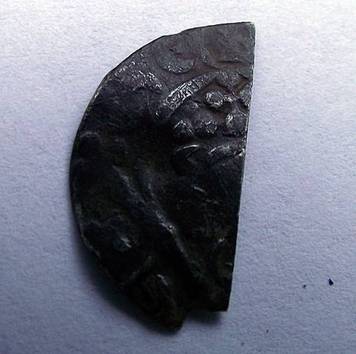