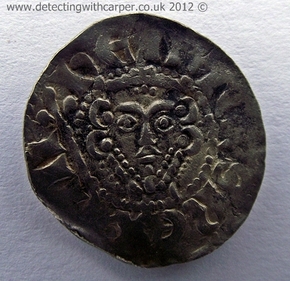 A 13th century English king who came to the throne at an early age
and whose reign was marked by strife with barons, led by Simon de Montfort. 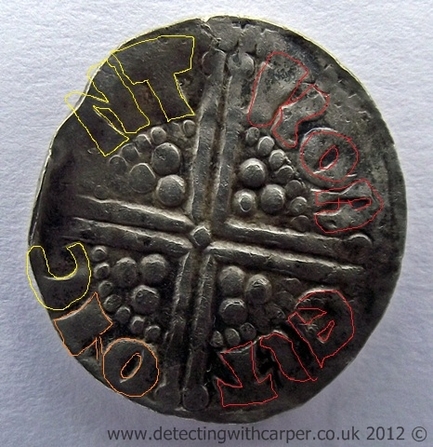 Alan "QM" Warner, has taken the time to give me a full ID on this cut half. This is the information kindly provided by him
We know the coin is a voided long cross so no guessing its a Henry III coin. 1st we look at the reverse, bits are worn, but its always good to try and locate a O if one can. On this coin we have 2, but the one we want is with a N for ON.  On this coin the N is ligated which means basicly it's joined to the hip of the O and is missing part of the down stroke of the N.  After the 'ON' is the mint which we can pick out C.NT, although the A is worn away we now know this is a Canterbury mint.  The last thing to see is if we can get the Moneyer.  Although well worn in places we can see it starts with a R and ends in a in T,  also we can clearly see the O next to the R a worn B and ligated ER so moneyer is ROBERT.  So the reverse reads ROBERT ON CANT. Robert minted classes 5c to 5h for Canterbury 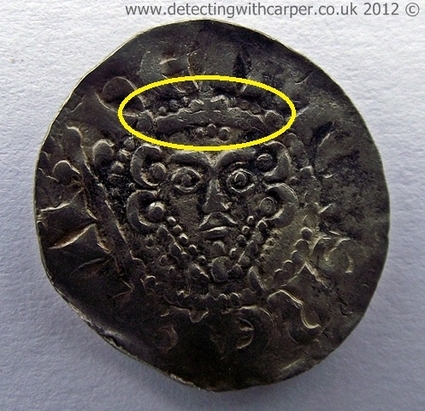 Henry was born on 1 October 1207 in Winchester, the son of John. Henry was nine when his father died and he became king. The country was ruled by a series of regencies until 1234, when Henry took over. Problems began as early as 1237, when his barons objected to the influence of Henry's Savoyard relatives. The marriage arranged in 1238 between Henry's sister and English nobleman Simon de Montfort only made relationship between Henry and his leading nobles worse. In 1242, Henry's half brothers involved him in a disastrously expensive military venture in France. This prompted parliament to demand new blood on the council to act as 'conservators of liberties' and oversee royal finances. But the king was able to exploit the differences between his opponents and little happened.

Finally, in 1258 a bungled deal with the Papacy threatened Henry with excommunication. This, together with defeats in Wales and local crises, brought about the main crisis of his reign. The Provisions of Oxford (1258) created a 15-member privy council, selected by the barons, to advise the king and oversee the entire administration. Parliament was to be held three times a year and the households of the king and queen were also to be reformed.

The settlement began to break down in 1260 with quarrels between the Earl of Gloucester and the ambitious Simon de Montfort. Civil war was inevitable. In May 1264, Simon de Montfort won a resounding victory at Lewes and set up a new government. In May 1265, Henry's eldest son Prince Edward escaped captivity and rallied the royalist forces, defeating and killing de Montfort at Evesham before taking control of government from his weakened father.

The rest of the reign was occupied by resolving the problems created by the rebellion. Henry deprived de Montfort's supporters of their lands, but the 'disinherited' fought back until terms were agreed in 1266 for former rebels to buy back their lands. By 1270, the country was sufficiently settled for Edward to set off on crusade. Henry died on 16 November 1272. He was buried in Westminster Abbey, which he had largely rebuilt in the Gothic style during his reign.