Bit too hot for
detecting!! 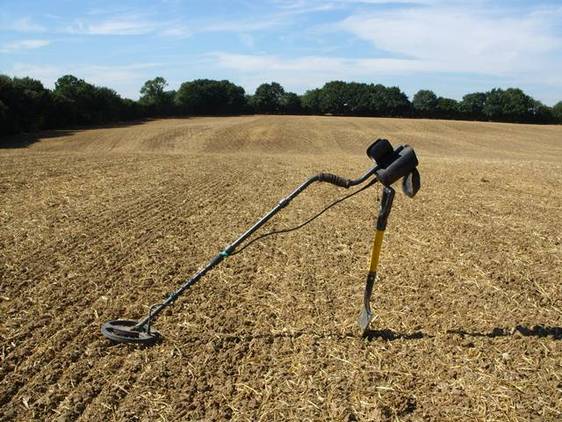 Saturday the 8th of September and I found myself back once again searching for those elusive finds we detectorists strive to find.
It felt as if it was one of the hottest days of the year, it was sweltering! And on more than one occasion I had to take some shelter underneath some big oak trees to cool myself down.

I'm not normally this lucky in getting out so often, but as the crops are out for a short while I am trying to make the most of it.

After last weeks successful search I decided to head back to the same field where I found the Lizzy halfpenny and the Henry III cut half. The farmer had been busy as last week the field was in short stubble, whereas today, the field had had a shallow plough and had been rolled, so it was perfectly flat. Almost perfect detecting conditions. The reason I say almost is because the heat had dried the ground out so much that there wasn't much moisture left to amplify the signals, and the ground was a tad hard to dig.But it was still nice to be out in the country side enjoying the silence and fresh air.

Again I planned on only a short four hour visit and arrived at the site for 10 o'clock. By 10:15 I was on my chosen field and ready to go. As the heat had dried the ground out so much the signals was very scratchy and not as clear as usual on the GMP. My first signal was a small four holed button that you tend to find everywhere.

I seem to find loads of buttons on this particular site. Maybe it was because of the night soil or maybe some other reason. I had the GMP set in the Auto setting again as this field has quite an abundance of the dreaded coke and hot rocks. Because I found the cut coin last week, I was listening for those very tiny signals that could turn out to be a cut quarter, I am yet to find one and I'm not sure what the signal will be like on the GMP. But I have no worries as I know the machine will have no trouble picking them up.

For two hours I was only finding lead dross and the odd button here and there and decided to cut into another field that was in the same state, nice and flat. I always find that this field is so quite. You can walk for ages and not have a single signal. Today was the first time I had been on here with the Goldmaxx. Straight away I got a very good high tone signal, and I had a feeling it was going to be a copper coin of some type. Instead it was a 1951 Shilling and closely followed by a worn Georgian penny. The field had come alive with more targets after the last ploughing with the plough bringing up more finds.

With my concentration back and renewed, I was on the ball so to speak, and the machine gave a very clear but quite signal. I tried again 90° and the signal disappeared. Because of the good tone from one direction I decided to dig any way. About four inches down was this tiny silver object. I think its from a hat or hair pin. But the workmanship is amazing for such a small item.


Just that little find made the session a goon one instead of blanking. I was also happy that this field had given up something interesting instead of those blasted cow medicine tubes!

With a new sense of hope I headed over to the far side of the field from one of the corners. In that line I managed to find three further buttons and an assortment of junk.

I had been detecting for nearly three hours now and decided to take a very long walk back to the car. The signals started to dry up and I spent a good twenty minutes with out a find. Then I got a high tone that nearly blew my ears off. Just under the surface was a large button with a nice pattern on. Better than one of those boring plain ones, I think its a Tombac type?

And a foot away from the button I got a very nice mid tone come through the phones. My heart gave the usual hammered flutter as I saw the beading a very crisp legend of a hammered coin. I managed to keep some patients and took a clod shot of the coin. 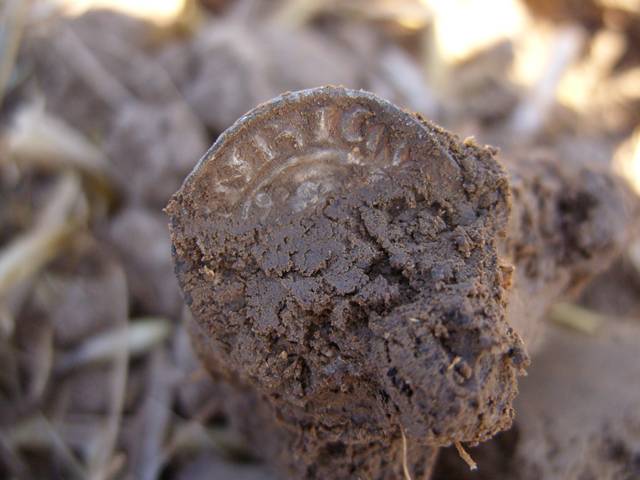 As I broke away the clod, I was a little disappointed to see the coin had been damaged by the plough. It would have been a real beauty of a find if it had been whole as the coil hasn't been clipped at all and the legend is very crisp.
With my good run continued I sat down and took a couple of shots of the coin. I am so lucky and happy that I am having a good season this year.

I up loaded the coin onto BMD for the very knowledgeable QM to ID and he has told me its a Henry II coin and minted by ALAIN of LONDON and it is a Class 1B coin dated to 1180-1189. For more than 800 years that coin could have been sitting there and I am the first person to hold since it was lost! What a great hobby this is!!! 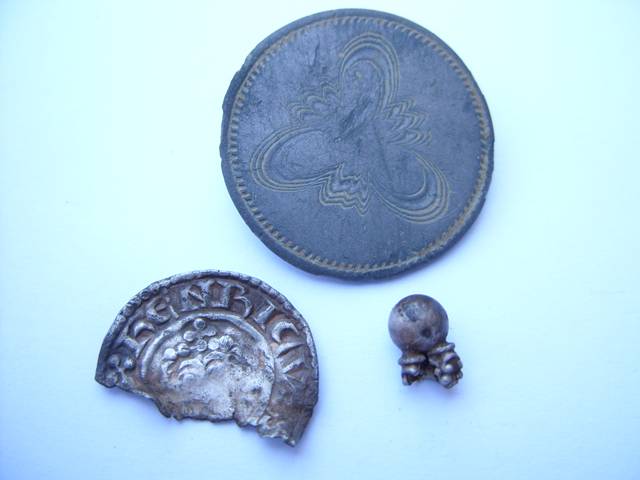 As always, many thanks for reading this and Happy Hunting
Carper