The Royal Corps Of Signals 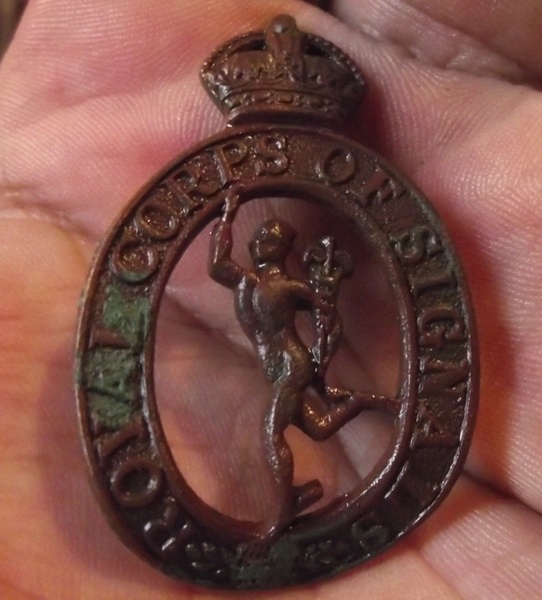 The Royal Corps Of Signals Badge

From earliest times some form of signalling has been used by armies in the field. The Greeks had the torch telegraph and the water telegraph, and the Roman army used coloured smoke as a means of communication.
In England, during the 16th century, beacons were used and in 1796 the Admiralty adopted a shutter- type machine, known as the 'Murray Lettering Telegraph', to communicate between London and Devonport. The following year the Army introduced the Radiated Telegraph System, which proved to be a more mobile system than the Murray Telegraph, and was used during the Napoleonic wars.
The next important advances in the field of communications were the invention of the Morse code and the development of the electric telegraph during the period 1835 - 1837. They were used for the first time during the Crimean War in 1854 - 56. It was during this war that specialist soldiers, the signallers, were first expected to provide communications in addition to their other battlefield duties.
The Abyssinian War of 1867 brought further active service experience for field telegraphists and signallers. As a result of the experiences gained in the two campaigns authority was given, in 1869, for the formation of a Signal Wing at the Royal Engineers' Depot at Chatham. In the following year C Telegraph Troop was formed and was responsible for the provision of telegraph communications for the field army. C Troop RE saw active service in the Zulu War of 1879 and it was during this campaign that the heliograph first gained recognition.

On 6th September 1935 the King honoured the Corps by appointing Her Royal Highness, The Princess Royal - Princess Mary - to be our Colonel-in-Chief.

Members of the Corps served in every theatre of war and at the end it had a serving strength of 8,518 officers and 142,472 soldiers. During the war 4,362 members of Royal Signals gave their lives. In the immediate post-war period, the Corps played a full and active part in numerous campaigns being involved in Palestine (1945 - 1948); the long campaign in Malaya which lasted from 1949 until 1960; the Korean War; the various operations in Cyprus, Borneo, Aden, Arabian Peninsula, Kenya and Belize. Throughout this time until the ending of the Cold War, the main body of the Corps was deployed confronting the Communist Bloc forces, manning some of the worlds most sophisticated communications systems from satellites to extensive area systems.
Since 1980, members of the Corps have spearheaded operations including the Falkland Islands campaign, the peace - keeping force in Lebanon and supervising the peaceful transition of Namibia to independence. Over 3,000 members of the Corps joined Operation GRANBY in the Persian Gulf conflict of the late 1980s.

In 1908 the Royal Engineer Signal Service was formed and provided communications during World War 1. At this time the Dispatch Rider (DR) came into prominence and wireless 'sets' were introduced into service. Wireless communications were provided in France and Flanders and also in the campaigns in Salonika, Palestine and Mesopotamia.

The first official agreement to form a separate Signal Corps was made in 1918 before the end of World War 1, but due to various policy delays the formation of the 'Corps' was delayed until 1920. A Royal Warrant was signed by the Secretary of State for War, the Right Honourable Winston S Churchill, who gave the sovereign's approval for the formation on the 28th June 1920 of a 'Corps of Signals'. Six weeks later His Majesty the King conferred the title 'Royal Corps of Signals'.
During the 1920s and 1930s the Corps increased its strength and had personnel serving in overseas stations such as Shanghai, Hong Kong, Singapore, Ceylon, Egypt, Jamaica and many other 'out - posts of the Empire'. The largest portion of the Corps was overseas and one third was concentrated in India.

Members of the Royal Signals have recently been deployed to every theatre of British military involvement. These include Kurdistan, Bosnia and Croatia within what was formerly Yugoslavia, the Western Sahara and Cambodia supporting the United Nations, Rwanda and Angola, and more recently Sierra Leone.

During Operation TELIC in the Persian Gulf in 2003 Royal Signals provided a major contribution with over 3000 personnel being involved.

The Corps continues to provide military commanders with their information requirement and ability to command and control their forces. The methods used are at the forefront of modern military communications and information systems technology and the Corps strives to live up to its motto 'Certa Cito', which freely translated means 'Swift and Sure'.

The Royal Signals cap badge is heraldically described as; "The figure of Mercury holding a Caduceus in the left hand, the right hand aloft poised with the left foot on a globe all silver above the globe a scroll inscribed 'Certa Cito' and below on each side six laurel leaves all gold, the whole ensigned with the Crown in gold."
But to every member of the Corps it is affectionately know as "Jimmy". 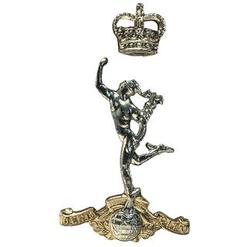