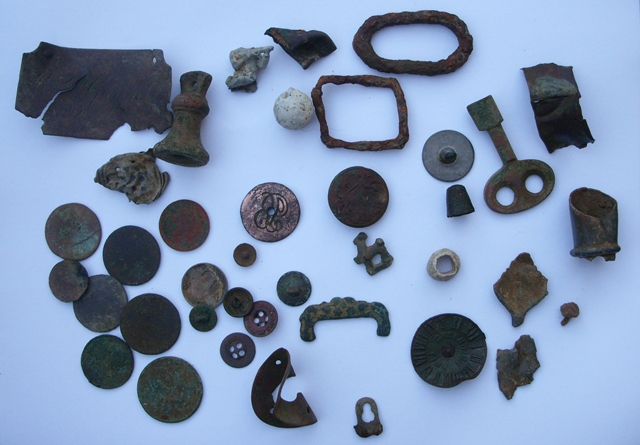 When I first started this web site, my main intention was to write about each and every time I went out detecting! But after a couple of dreadful sessions with nothing to show for my efforts, I felt I had nothing to write about.
That coupled with the fact that I haven't been out detecting since mid- October, with work and family commitments keeping me away, I slowly began to lose interest in the hobby!! For the first time in two years, I haven't been too fused about when I will get my next chance to go and find something old and beautiful. I began to stop posting on the forums and even stopped visiting too.

Until a gold hammered showed its face.

No, it wasn't my find, but my good friend Jimmy.  He has had the good fortune to find an absolutely stunning James Quarter Laurel Hammered. His enthusiasm, and excitement has been very contagious and has given me that much need kick up the arse!!

Being a Sunday and sat at home with the kids watching The Incredible's. My boredom me to my shed to clean some of the finds I had made on my last two outings.

On my desk was the first trips findings, still covered in mud and in need of a good old clean. I found these on my own permission back in early October. The forecast didn't look to promising, with heavy rain lashing it down the previous day, and not much better prospects for the following day. I arrived at my chosen site and the sky looked quite clear, so I decided to leave the water proofs in the car, and headed for the field in question. With all the rain in the area lately the ground was very wet and sticky, and I was soon walking about and extra foot taller.

After the first hour and with not much to show, I decided to hit a productive patch and slow right down and see if I could winkle any finds out. But it wasn't to be, with the only interesting finds for me was an old watch face and a Livery Button which I think is from the London Police. 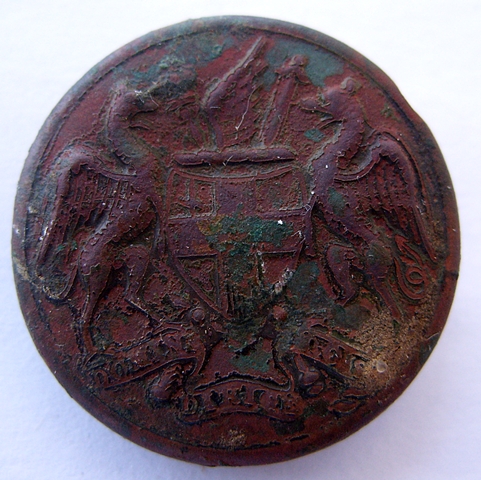 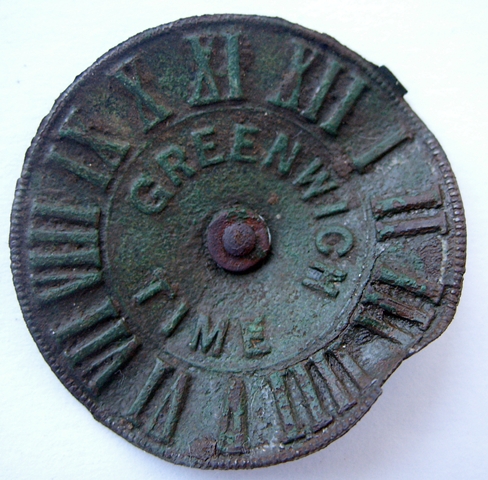 I carried on in the same area for another couple of hours until the first drops of rain fell, within no time at all, I was stuck in a downpour and a good mile or so away from the car, where I had stupidly left my waterproofs. I made the decision to carry on detecting my way back to the car as I was so wet already, I couldn't get much more wet. Nothing of great beauty or age turned up but a few interesting items did fall to my coil, including a nicely decorated buckle, well part of a buckle, two interesting looking items, which I dot have any idea about and a couple of worn Georgian coppers 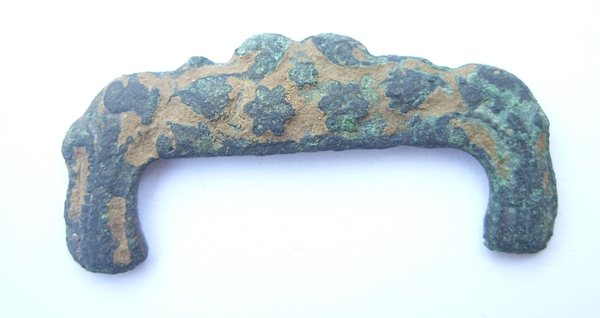 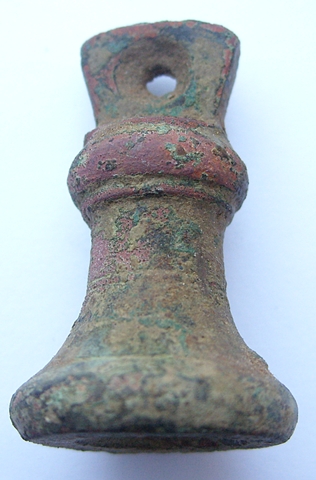 One of the coppers had what looked like a faint pattern on it, but it was so worn I didn't give it much thought and consigned it to my scrap pouch. When I cleaned it this morning, I could still see the faint pattern on it, but it was so worn that I decided on giving it a gently rub with some wet and dry paper. The results were very pleasing and I wish I took a before picture. The coin has a hole through the middle and a what looks like a letter or maybe two in the centre. It is also slightly bent so maybe this was a love token? 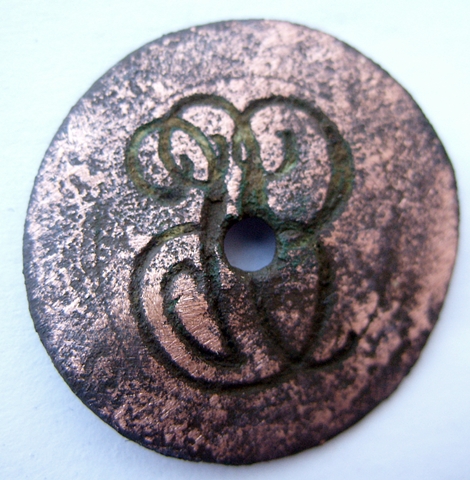 My last find of note turned out to be very interesting, well for me it is. Its an American 5 cents, with a Native American on one side and a Buffalo on the other. I kept this coin in my good tin, and when I got home i popped it into some olive oil to try and give it a gentle clean.
Five Cents Indian Coin

At the end of October I attended a CS dig with my friend Alan (QM), We made the journey with another friend, called John. It was a very cold morning and it was the first time I had to scrape ice off the window screen in the morning! On the way as we was travelling on the M25, I asked Alan if it was due to rain today as I had left my waterproofs at home. "No mate, its going to be a little windy, but clear and dry". Thats good then I thought at least it will be dry! What happens ten minuets later?? It starts to SNOW!! I couldn't believe it!

It soon dies away as we head to Sawbridgeworth to meet with John and the clouds fade away, to leave a clear looking day.
We arrived at the dig site ad had our usual breakfast of bacon rolls and tea, and not to long away the dig started. As soon as I stepped onto the field, I hit an iron patch, or that's what I thought.  After getting iron signals with every sweep wherever I went, I learned that the site was covered in ironstone. It was the first time I had ever been on a site like this, so I slowed my speed down and concentrated on the noise the machine was telling me.
Unfortunately it wasn't to be my day with little finds of any note. Just a few buttons and a broken lead toy. But back to the weather, Just as I decided I had had enough, and make my way back to the car. A huge hailstone storm hit, and every pocket of my clothing held a good handful of ice inside!

So if Alan ever tells you the weather, be sure to check for your self!